The EMD SDP40F was Amtrak's first, official, built to order locomotive (previously they had operated using second hand equipment, such as E8's, F7's and even GG1's). A need for new and more reliable equipment spurred the development of the SDP40F. Based on the framework of the SD40-2, the SDP40F was geared for speed, with a top operational velocity of 100 mph and a pair of steam generators to supply heat and hot water for the passenger trains it would pull, such as the ex-Santa Fe "El Capitan" and "Super chief" (renamed the "Southwest Chief" in its combined state).

Thanks to their SD40-2 heritage, the SDP40F's were fairly simply converted to freight use, which allowed them to maintain relevance after the introduction of their successor, the EMD F40PH, in the late 70's and early 80's. A number of SDP40F's were traded over to the Santa Fe Railway in 1984 where they were modified and repainted into the distinctive warbonnet scheme and maintained in service for nearly 15 years. 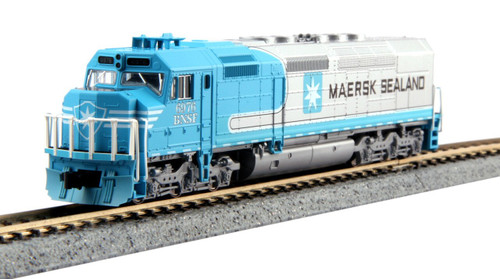